I've been thinking about a calligraphy workshop I'll be teaching in 10 days time on colour and calligraphy. The members of the class are mainly new calligraphers, and all have learnt foundational so I have been asked to incorporate some foundational variations.

Foundational isn't a hand I've used alot. I learnt it fairly early on, then fell in love with Italic and all its potential and never really used foundational. I always found Edward Johnston's version clunky, stiff and dated. I began using foundational when I started having to inscribe a memorial book, which had initially been done in a very light, fine and elegant foundational hand. A woman's hand I tend to think. So I've come to like that version, but I've never considered variations. What constitutes a foundational variation ? The Flamingos piece below is my initial play with foundational variations, inspired by the photograph "Flock of flamingos drinking" which you can link to by clicking the title "Foundational Variations" above. 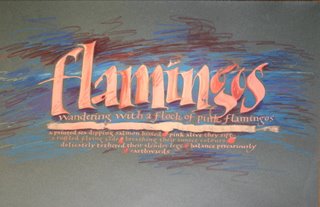 I've had a play with a variety of pen weight and degrees of compression and stretching, but what playful versions of foundational exist ? To incorporate slope just doesn't seem appropriate for foundational. I always enjoy using a hand called "Bone" which has some elements similar to foundational, such as triangular serifs. But it generally branches in an Italic way, at least in my version it does. 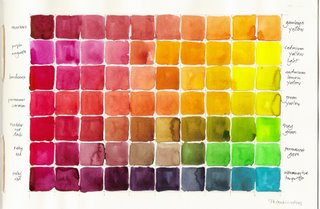 I've still been working on mixing watercolour gradients, and I've enjoyed looking at various shades of pinky red and how they combine with warm yellows, through to greens. As you mix a colour's opposite, you tend to get a mid-range of oranges, browns and greys. A little of the opposite colour tends to deepen the original colour, meaning the pinky reds become various shades of plum, burgundy and aubergine. 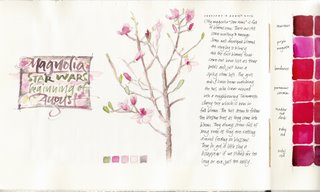