Summer here in Wellington is marvellous this year. I have even been swimming in the sea! And my work has been about exposing more people to the joys and sunshine of calligraphy.

The National Library reopened at the end of November after an extensive face lift. It was a delight to be invited by Ruth Lightbourne, the curator of the Alexander Turnbull Collection, to teach illumination and calligraphy as part of the exhibition, "To the Ends of the Earth: Bibles in the Alexander Turnbull Library". Here is a link to the talk on making pigments  http://natlib.govt.nz/events/alison-furminger-demonstration-on-making-pigments

Adults and children alike were delighted to discover how to make an illuminated letter using gum ammoniac, transfer gold leaf and gouache, and another group of adults had a go at a pro-Gothic hand using quills. The workshops were kindly sponsored by the Alexander Turnbull Endowment Trust. The workshops were certainly successful in getting people into the National Library and allowing them to discover the delights of the illuminated manuscripts on display.

In answer to a promise in a previous post, here at last are the results of my lighfastness test of the new Caran d'Ache "Luminance" coloured pencils. True to their claims, the lightfastness was exceptional. One year in a north facing window in direct sunlight, and there were no obvious signs of fading. This range has certainly solved the problems I have had with the general poor lightfastness of coloured pencils. I have noticed with our extremely hot summer that some of the leads have got mottled white specks as a result of the heat, but this doesn't seem to affect their performance in anyway. I haven't had any other new products to test, but if anyone would like to send me something to test, I would be delighted. 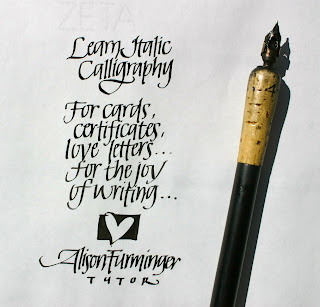 I am teaching a beginners Italic calligraphy class, through Chalkle, March 11 from 7-9pm at  Innemorst Gardens, Lawson Place, Mt Victoria for $27.60 including materials. Bookings are through Chalkle if you are interested at giving calligraphy a go. http://www.meetup.com/sixdegrees/events/104979312/

Illuminated manuscripts have been featuring quite a lot in my work lately. As well as a number of commissions from individuals for works with raised and burnished gold and illustration on vellum, I recently completed an illuminated letter on behalf of Father Time for a My Sky ad. I hope this renaissance in traditional calligraphy skills will continue to shine and flourish.

Another commission was to write out a prayer by Christine Nelson and I was asked to include a pohutukawa tree. Pohutukawa trees can grow hanging off the side of a cliff above the sea. They are also New Zealand's Christmas tree. This piece was such a joy that it inspired the pohutukawa Christmas card image.
I was asked to complete two family trees for a client. Family trees are quite a challenge as you don't want to make any mistakes or smudges. You can breathe a sigh of relief when they are finished.