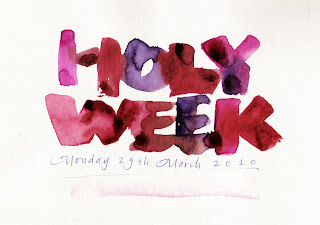 It is Easter once again. The pear tree has been full, its produce slowly being transformed into glistening bottles of fruit ready for winter. Easter has been a time to take stock and enjoy some of the quiet spaces and beautiful singing at St Paul’s Cathedral in Wellington. 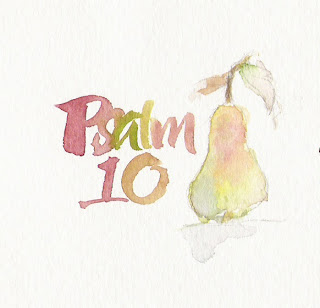 I have been fortunate to be able to play with some genuine lapis lazuli and Tyrian purple to begin autumn. 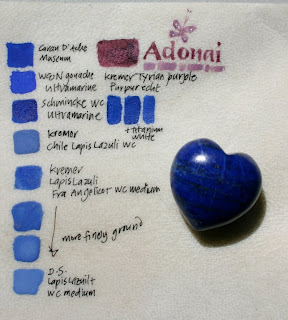 Here you can see the colours on vellum, with a small lapis heart. I have compared the lapis with modern ultramarine pigments. The Kremer lapis pigment has been purified according to Cennini’s recipe.
I was recently asked by a delightful Welshman living in New Zealand to inscribe his wedding vows as a first anniversary present. The piece was done on a beautiful piece of handmade flax paper as flax had been a theme at their wedding.

I wanted to incorporate something Welsh, so I chose to do the Welsh title in lettering based on the work of the renowned Welsh artist, David Jones.
The most extensive reference for David Jones’ lettering is the now rare 1981 book by Nicolette Gray, "Painted Inscriptions of David Jones". The copy I borrowed is in the Auckland City Library collection (which was oddly stored in the basement, normally a place for books that are very rarely borrowed, and/or on the way out; it fetches quite a price second hand). If you ever get the chance to borrow a copy it is well worth it to see the unique and beautiful lettering art of David Jones. The book is also an insightful investigation into his artistic vision.  Here are two links to the National Library of Wales which holds a collection of his work and you can see some examples of his painted inscriptions.
National Library of Wales David Jones selection


David Jones' NID GORWAITH
My client loved the piece but had never heard of David Jones. When I showed him a reproduction of his work he immediately thought of the lettering that makes up the Wales Millennium Centre.
The Wales Millennium Centre appears to be a unique and stunning building in which lettering is a central design feature and an integral part of its structure. The letters are in fact the windows in the front face.


Wales Millenium Centre image.
In the online description of the inspiration behind the calligraphy on the building, there is no mention of David Jones. There seems to be a direct reference to David Jones’ work in the design. The letter “S” seemed to follow the particular sloped version that David Jones used. Similarly, the “O” with a dot in the centre, the sloped “W” and the unusual serifs on the “N”. What do you think? Has David Jones been forgotten?
I was recently commissioned by a Wellington bookbinder, Bill Tito, to inscribe a poem in book form for one of his clients. 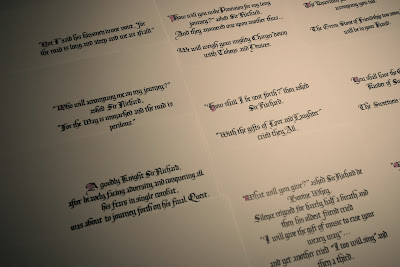 The old world style of the poem was reflected in a gothic style hand for the script. Gothic is something I never normally get to use, so it was interesting to do some extended writing in it.
I have enjoyed making cards recently for friends and members of the family, using brush lettering on rough water colour paper, with collage using interesting textured and hand coloured papers. 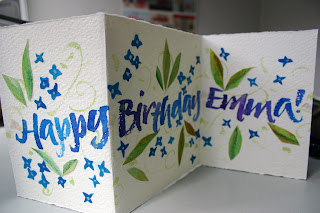 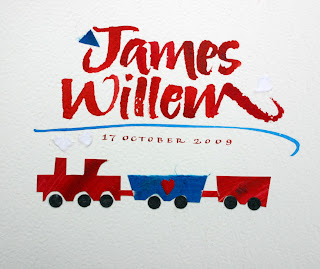 Finally I have some Caran d’Ache Luminance coloured pencils to play with. Can I say they are gorgeous. 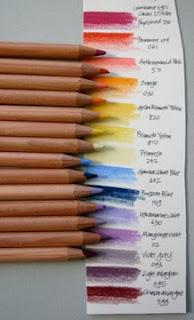 The pencils themselves are made using a most beautiful light ash coloured wood with a silky varnish which is lovely to hold. The feel of them is unlike any other pencils I have used before. The leads are soft, with a slight bit of flaking when you use them; opaque and brilliant in colour.
I bought a small selection from their full range of 76 colours. I was surprised to see that the colours I had chosen were all the colours in my garden at the moment.

So, here is my play with the pencils and my water colours following my garden flowers colour scheme. 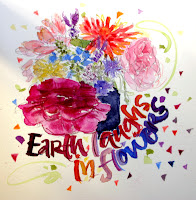 I’m very happy with the Luminance pencils so far. I’ll be very interested to see how they respond to my lightfastness testing, given their claim to exceptional lightfastness properties.


Wishing you peace at Easter.

Posted by Alison Furminger at 2:28 AM

A lovely blogsite, and kudos for it. I am prompted to write simply in order to "second the motion," so to speak, concerning disregard and lack of acknowledgement for David Jones' manifest influence upon the monumental calligraphy that graces the Wales Millennium Centre at Cardiff, Wales. I have not seen this discrepancy pointed out in any other forum or venue, to date. And yet David Jones [1895-1974] is an acknowledged Welsh treasure [Anglo-Welsh, in point of fact] in both the literary- and visual-art realms. So it is perplexing -- even quite sad -- that Officialdom (so cognizant of Jones in other respects) has essentially air-brushed him out of the history of Wales' new symbol of cultural self-confidence.

Your colors are so beautiful! It is a joy to look through your blog. Love your blog name too!